Kerala, also called ‘God's Own Country’ is known for its picturesque landscape and beautiful backwaters. Located in the Malabar Coast of India, Kerala is a prime attraction for tourists from all over the world. Kochi and Trivandrum are the two prominent cities of Kerala, and they are also famous for information technology parks. Trivandrum is the capital of Kerala, and it is an Information Technology hub in Kerala.

Kochi is also known as the Queen of Arabian Sea, and it is the financial, commercial and industrial capital of Kerala. Trivandrum and Kochi have come a long way when it comes to development. The advent of new industries and several IT parks has led to an increase in the number of vehicles on the roads. Although traffic congestion is not a major problem in Kerala, pollution is increasing, and it is a threat to the environment.

Edappally is a major commercial centre and a prominent residential region in Kochi. Edappally junction is one of the busiest junctions in Kochi. The distance between Edappally to Paravoor is around 18km. The traffic congestion on this route is not as bad as compared to other cities, but the travel distance makes commuting an expensive affair. Bike pooling has emerged as an affordable way to commute, and it has also reduced the travel time. Bike pooling has also helped to reduce carbon emissions, which is the ultimate goal of ride-sharing.

Thrippunithura is a prominent residential area in Kochi, and it is located around just 10km away from the city centre. On the other hand, Aluva is one of the major industrial centres of Kerala. The distance between Thrippunithura and Aluva is 22km, and more than traffic congestion, the distance is the main hurdle for commuting. More distance means more travel expense. Bike pooling reduces travel expenses as well as travel time. So, when bike pooling you save on money and time. But the important aspect of bike pooling is that it reduces carbon emissions and saves the environment.

Thoppumpady is home to Cochin Fisheries Harbour, one of the major fishing industries in Kerala. Palarivattom is a commercial area, and it connects to some of the key locations of Kerala. The distance between Thoppumpady to Palarivattom is 15km, and bike pooling on this route saves a lot of money and time. Considering the distance of the route, bike pooling has turned out to be a convenient option for commuting. Quick Ride has made bike pooling simple and hassle-free.

Kaloor is a happening place as it is home to some of the key locations such as Trivandrum International Stadium, a metro station and much more. Infopark is the Information Technology hub of Kerala, and it is home to over 300 companies. The route is just 11km but the traffic congestion during peak hours makes commuting difficult. Bike pooling makes commuting easy and fast, and it also reduces carbon emissions. 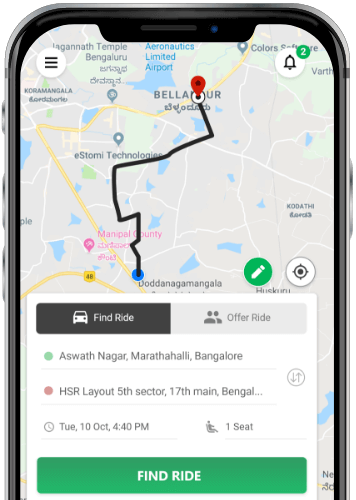